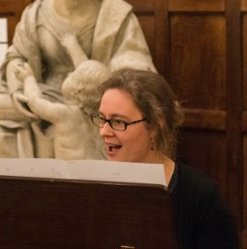 Mezzo soprano Patricia PE Janssen started her musical career aged 8 in the Academy of Merksem (Antwerp).  She started with the flute for which she obtained her degree in 1998.  For some time she experimented with the clarinet after which she discovered the pleasure of singing.

After studying classical techniques with Dirk Van Croonenborch and Martine Renson, she focused on musical theatre with Pascal De Turck at dé Kunsthumaniora in Antwerp.  Wim Lancrock and Frank Hoelen guided her for drama.

During her stay in England, she sang with The Cantus Singers of Cambridge and the chamber choir Cantores. In 2004 she founded the ensemble Mensurabilis which continues with Belgian musicians since 2009. The repertoire consists of Medieval and early Renaissance music.

Between February 2013 and June 2019 she taught singing, piano, accompaniment and fast track solfège in AMW Lubbeek. Her class was invited to perform the creation of a new work by Vladimir Gorlinsky during the TRANSIT festival in October 2013.  In 2015 they created their own musical Any dream will do and in 2016 they explored the world of opera in Ceci n’est pas un opéra, Orpheus with a twist.  In 2019 they gave a concert including duets, trios and ensemblepieces, for which she also created the Female Desire vocal ensemble project.

The joy of making music is something she considers really important.  That's why she founded Music in-a-company in 2019 -after the AMW was dismantled by the city council-, a non-profit music academy which offers qualitative courses to all with a focus on the pleasure of making music, whilst keeping an eye on a good technical foundation.

She is working as a breathing and vocal coach, both with groups (choirs) and individuals on finding their own voice.